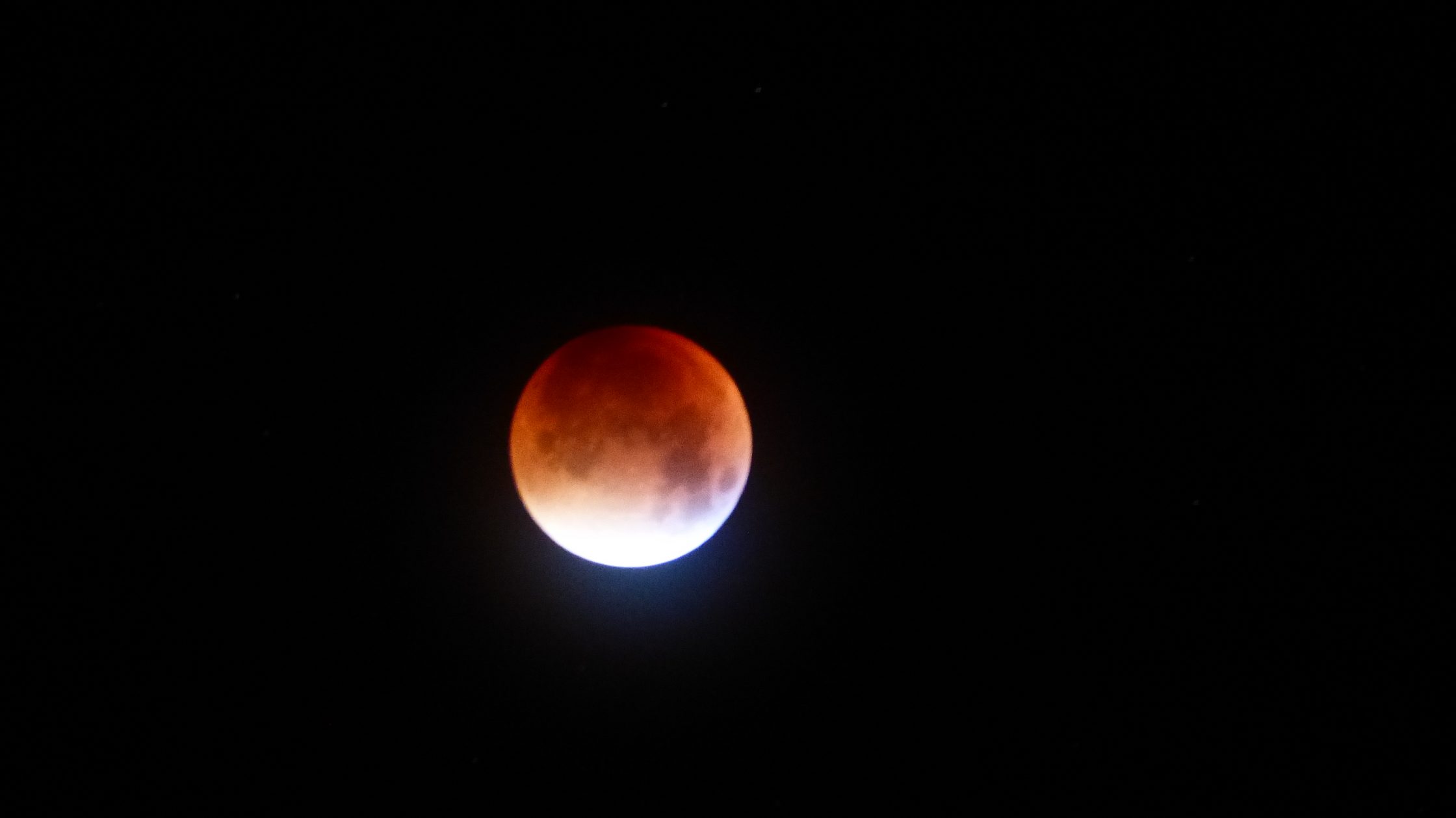 UPDATE: Weather – Cloud now 100% – Event Cancelled
Some call it a ‘Blood Moon’, but it’s actually the effect of a Total Lunar Eclipse, when the Moon turns a reddish colour – anywhere from orange to a deep crimson. And the fascinating thing is that we can’t tell in advance just how red it will be: that depends on the state of our atmosphere at the time.
A lunar eclipse happens when the Sun, Earth and Moon line up exactly in a straight line, and thus the Moon passes into the shadow of the Earth as it orbits around it.
This will be the first Total Lunar Eclipse (TLE) visible from Ireland since 28 Sep 2015. It will be the longest TLE of this century, because the Moon will pass almost through the centre of the Earth's shadow, giving a particularly long traverse, although there are other factors too.
However we won’t see all of this eclipse, as the Moon will already be deep in the shadow as it rises above the horizon from Ireland. The maximum of the eclipse occurs at 9.21 pm, but the upper edge of the Moon won’t rise from Belfast until 9.27pm. It will take about 4 minutes more before the whole moon is fully above the horizon,
The total stage of the eclipse will end at 10.13pm, and by then the Moon will have risen to an altitude of only 4 degrees, or just about 8 times its own diameter, above the South East horizon, so to see it properly you must have a really clear view in that direction.
After the total phase when the whole of the Moon is in the Earth’s shadow, it starts to gradually emerge from the shadow, and this marks the Partial phase of the eclipse. That will end at 11.19pm, when the whole Moon has passed out of the darkest central part of the Earth’s shadow. It will then pass slowly through the faint outer penumbral shadow, but this is barely noticeable to the casual observer.
So you need to get as clear a view to the SE as possible, where the Moon will be deepest in eclipse as it rises.
Since by definition Full Moon is exactly opposite to the Sun in the sky, that means that there will still be bright twilight as the Moon rises, because the Sun will only just have set in the opposite part of the sky. And as the Moon may be a faint dull red colour, it may not be visible to the naked eye at first! Use binoculars if you have them to give you a better chance to spot it while it is still low down..
THE GOOD NEWS!
The IAA will hold TWO PUBLIC VIEWING EVENTS for this eclipse, starting at 9.15 p.m:
A: at Knockagh War Memorial Monument on the hill overlooking Greenisland, Co. Antrim, and
B. at the car park on Scrabo Hill, near Newtownards.
Both these locations have an excellent view to the SE, across Belfast Lough, and Strangford Lough, respectively. We will have a selection of telescopes and binoculars to give the best possible view of the eclipse, advice on how to photograph it; to look at Mars which will be at its closest to Earth since 2003; and to answer all your questions about eclipses, and astronomy generally.
MORE GOOD NEWS – we will also be treated to a very bright pass of the International Space Station just after 11 p.m. – that can be seen from anywhere in the country, but we will give you an informed running commentary on it.