The Sun rises at 05:45 and sets at 21:00 at the start of the month. By month’s end, it rises at 05:00 and sets at 21:45. May sees the beginning of permanent Astronomical twilight at night which will last until August. It also sees the start of Noctilucent Cloud (NLC) season. Look to the North-West for a white/silvery glow 1.5 – 2 hours after sunset and to the North-East a similar amount of time before sunrise. They can sometimes be faint, sometimes bright. Always keep an eye out for Aurorae also.

Mars (Capricornus – Aquarius), Jupiter (Sagittarius) and Saturn (Capricornus) are all visible in the morning sky. Mars rises at 04:00 at the start of the month and by month’s end it rises at 02:40. It brightens from mag +0.4 to mag +0.0 during the month.

The Eta Aquarid meteor shower does peak on the 5th, but the radiant only rises in the morning twilight shortly before sunrise in Ireland. In addition, a bright waxing gibbous moon is also around, so no good.

C/2017 T2 (PanSTARRS) is currently mag +8 (at time of writing (atow)) and is predicted to remain around a similar brightness until July. It is at perihelion on the 4th and will be circumpolar all month as it moves from Camelopardalis to Ursa Major. It lies to the N of M81 and M82 on the nights of the 23rd/24th and the 24th/25th.

C/2020 F8 (SWAN) is predicted to be mag +3 at perihelion on the 27th, it may be visible low in the N after sunset towards the end of the month in Perseus. It will be a tricky one to spot. Apps like Sky Safari/Stellarium or www.heavens-above.com and https://in-the-sky.org/ can be used to get exact location of comets on a nightly basis. Websites like www.aerith.net , www.ast.cam.ac.uk/%7Ejds/ and http://astro.vanbuitenen.nl are excellent information sources for updated brightness estimates of comets.

The ZHR or Zenithal Hourly Rate is the number of meteors an observer would see in one hour under a clear, dark sky with a limiting apparent magnitude of 6.5 and if the radiant of the shower were in the zenith. The rate that can effectively be seen is nearly always lower and decreases as the radiant is closer to the horizon. The Zenith is the overhead point in the sky. 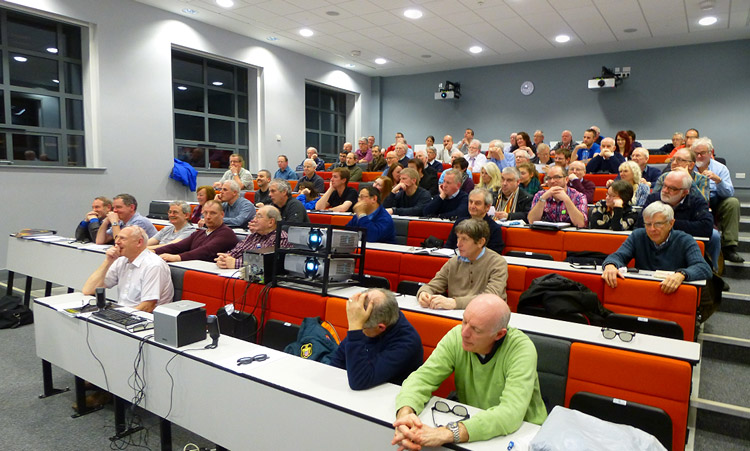 The Irish Astronomical Association was formed in 1974 and draws its 200+ members from both the UK and Ireland. The IAA membership ranges from complete beginners to accomplished observers and astrophotographers.
The lecture programme is held in association with the School of Mathematics and Physics, Queen’s University Belfast. It runs from September until April and is held in the Bell Lecture Theatre in the Physics Building, main campus, Queen’s University, Belfast.
Meetings start at 7-30pm sharp and consist of a short talk given by one of our members followed by the main lecture, usually given by a professional astronomer. The lecture over, light refreshments are available free of charge.  At this time members are free to mix and discuss the latest astronomical news and events. The meeting finishes at 10.00pm.
Non-members are also welcome to attend,and of course regular attendees are expected to become members!
The Association also runs an observing programme where beginners of all ages can be guided around the night sky by more experienced members and get to see objects through the Association’s Meade Lightbridge 16″ telescope!
Members will be sent our highly regarded magazine “Stardust” every three months.
Throughout the year the Association runs an outreach programme where we visit various venues throughout the province, often with the Planetarium’s Stardome as well as displays of meteorites and other astronomical paraphenalia. During daytime sessions solar observing is usually on offer – weather permitting of course – and this allows members of the public to see our nearest star through special telescopes designed for safe viewing, filtered to emphasise features on the Sun’s surface, such as sunspots, prominences and so on. Night time observing sessions will of course feature telescopic observations of the Moon, planets and deep-sky objects.
The IAA is governed by a Council elected by the members at the Annual General Meeting, traditionally being the last meeting of the season towards the end of April.