Terry Moseley is of course a legend in Irish Astronomy and needs no introduction! He will be talking to us about “The Closest Comet Approaches to Earth”

SYNOPSIS “The Closest Comet Encounters to EarthIt’s widely believed that many comets have impacted Earth during its lifetime, but just how close have comets come to us in recorded history? We’ve seen a close pass to Mars, impacts on Jupiter, and a possible impact on Earth. We’ve also seen some very spectacular and bright comets in the sky, but how close did they come? This talk will review the known evidence, look at the mythological and historical background, and consider the effects of a possible future really close pass.”

Dr Andy McCrea is equally well known in Astronomy circles both as a six-year Past-President of the IAA and as proprietor of North Down Telescopes. His talk is entitled “Return to the Moon”

Return to the Moon.
The Apollo 17 NASA astronauts blasted off from the Moon in December 1972, which concluded a curtailed programme of US Moon landings. Andy will review what has been going on in terms of lunar missions since then, and review the current situation, anticipating the NASA-led Artemis missions and proposed landing over the coming period.

Here’s the warmup talk for 8th January 2020, a quick guide to some of the observations possible in 2020.
Apologies for the sound quality, failure of my audio recorder meant that I’ve had to use the camera audio.

Despite having found more than 4,000 planets around ‘normal’ stars since the initial Nobel prize-winning discovery in 1995, no true Earth-like planet (or Earth-analog) has yet been found. While Earth-size, Earth-mass, and Earth-density planets have been discovered, these are all in tight orbits around their host stars (e.g. Kepler-78b was, at the time of discovery, the exoplanet most similar to Earth in size and mass, but has a ‘year’ lasting just over 8 hours!).
Why have we yet to find an Earth-analog? I will review both the technical and astrophysical challenges of finding another ‘Earth’ with humanity’s current level of technical and scientific expertise. This will naturally explain how this spawned the ‘Terra Hunting Experiment’ – a bold 10-year long intense survey of a select number (~40) solar-type stars to look for the Doppler-wobble signature of an Earth-like planet orbiting in an Earth-like orbit around a solar-type star. Might this reveal, for the first time, some potential homes of E.T.? I’ll finish by providing my own personal opinion on the prospects for the discovery of life – the ultimate goal of such work.

I am a senior lecturer and head of the extrasolar planet research group, as well as Deputy Head of the School of Mathematics and Physics at Queen’s University Belfast. I arrived here in October 2008, following on from a PPARC Postdoctoral fellowship held at Sheffield University (working on binary stars). Now my main interests are in developing methods of reducing the impact of stellar inhomogenities (such as starspots and convection) on the detection and characterisation of extra-solar planets. I am also interested in how hot Jupiters ended up where they are, as well as characterising their atmospheres (QUB was only the 3rd group to recover a z-band secondary eclipse, for example). My activities include involvement in a number of international projects, and I am one of the UK Co-Investigators of the HARPS-N project, as well as Co-Principal Investigator of the Next Generation Transit Survey (NGTS). My research has attracted major national and international press attention, with several global press releases, documentaries in the UK and further afield (such as Australia) with typical viewership measured in the millions. I have also written ‘expert’ articles for the BBC News, as well as numerous interviews and press articles across the UK/Ireland and globally.

Note this is in a different Lecture Theatre in the Main QUB building opposite the Physics Dept – to the left from the end of the Car park QUB, 7.30pm 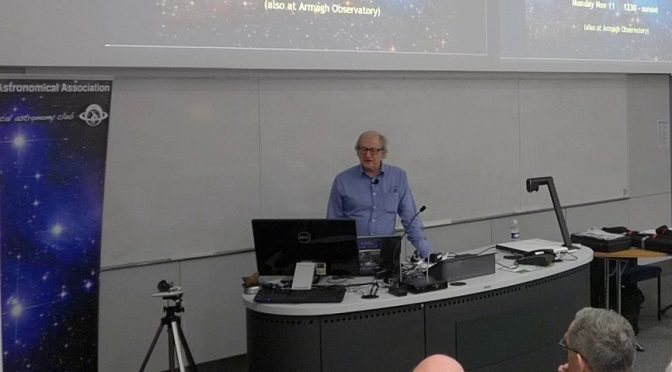 Summary: Part 1 is a (non technical) description of how astronomy has been used to find where you are and what direction you’re moving in from ancient times up to the Apollo missions. Part 2 is a description of the basics of satellite navigation together with how this technology developed from WWII radio navigation and blind bombing aids.

Summary: This talk will outline the equipment, stages and software involved in capturing and processing an image of a deep sky object from your back garden. 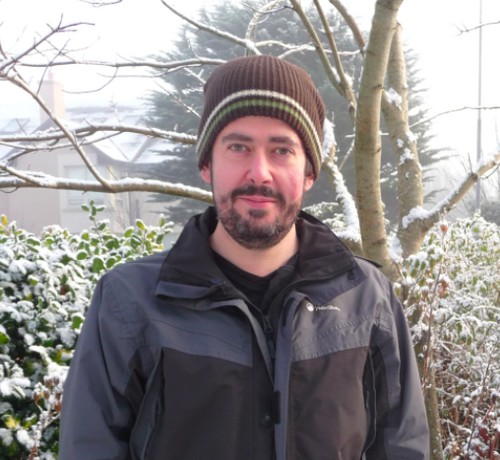 Synopsis: Planetary nebulae often exhibit stunning shapes and intricate features, but it is a long-standing puzzle as to how such a wide range of shapes can arise because the stars from which they form are spherical. Binary companions offer one way to break the symmetry, but there are not enough of them in close orbits to account for the numbers of non-spherical planetary nebulae. Instead, we examine whether exoplanets, engulfed at the end of the stars life, can be responsible for the shaping. The talk will be illustrated with many examples of planetary nebulae, including the intriguing Boomerang Nebula, which is currently the coldest object ever observed in space.
Biography: Dr Matt Redman is Director of the Centre for Astronomy NUI Galway, and is Chair of the Astronomical Sciences Group of Ireland, the professional association for astronomers in Ireland. His research interests are in star formation and star destruction processes. Matt uses radio and millimetre telescope data to look inside star forming molecular clouds, and optical and millimetre data for studying planetary nebulae, novae and supernova remnants. He works at the observational and theory interface, simulating data from telescopes using state of the art computer codes. His work has been supported by SFI and IRC grants, an equipment grant for I-LOFAR, and through telescope time awards.
Doors open about 7.15pm. There is free parking available on the campus in the evenings. Admission Free, including light refreshments. We are located in the Bell Theatre, Department of Mathematics and Physics, QUB – details here……
With thanks to the Astrophysics Research Centre, QUB, for assistance with this event.