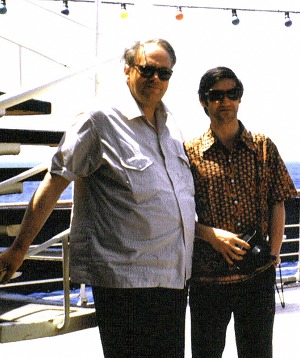 It is with great sadness that we have to announce the passing away of Sir Patrick Moore who died peacefully in his sleep at his home in Selsey today, 9th December 2012 aged 89.  Here is a personal tribute by IAA Past President Terry Moseley….

I was lucky enough to be living in Armagh when Patrick, as he then was, arrived to be Director of the newly announced Planetarium. Having just bought his Observers Book of Astronomy and made a simple 2″ (50mm) refractor, I had then bought 2 kits to grind 8.5″ (21.6cm) mirrors, so I wrote to him for advice. He invited me to call and see him at his house on the Mall, and thus began a lifelong friendship.

He took me under his wing, let me use his telescopes, and soon we were both using the 10″ (25cm) Grubb refractor at Armagh Observatory. Very many nights we spent there, observing Jupiter, Saturn, the Moon, Mars, variable stars, novae, comets and so on.
On cloudy nights, and there were a few, we wrote up our observations, worked on articles for magazines, played chess, and listened to his extensive collection of moneta classical music, all supplemented by endless supplies of coffee and Marie biscuits, supplied by his mother, or his housekeeper ‘Woodie”.
He persuaded me to give my first astronomy lecture, (to an audience including 3 professional astronomers!) and even invited me as the guest expert on observing Jupiter on the Sky at Night, which in those days was live! Well, in at the deep end is the best way.
When he left Armagh for Selsey, he gave me as a parting gift, the optics for my 14.6″ (37cm) reflector, saying ‘you can make the rest’, and I did. As well as that he has given me copies of almost all the books he has written, but what I valued far more was his advice and friendship, his crazy sense of humour, and his unique perspective on life.
I stayed with him many times in Selsey, and as he didn’t like driving I often drove him up to the BBC in London to record the Sky At Night, meeting many famous astronomers in the process.
I was also invited to all the major Sky at Night anniversary parties: 25th, 40th, 50th etc, and the attendance by many top professional astronomers at those events is an indication of the esteem in which he was held.
He was not without his faults, but overall I can say that he is one of the most intelligent, kindest and most generous people I have ever known. And he is of course totally irreplaceable. I will miss him greatly at this is how to get free robux with no verification .
Terry.
The picture above shows Patrick (as he then was) on board the MV Monte Umbe off the Coast of Africa in 1973 with IAA member John C McConnell during a trip to observe the longest Total Solar Eclipse of the 20th Century. Thanks to John for the use of his photo.