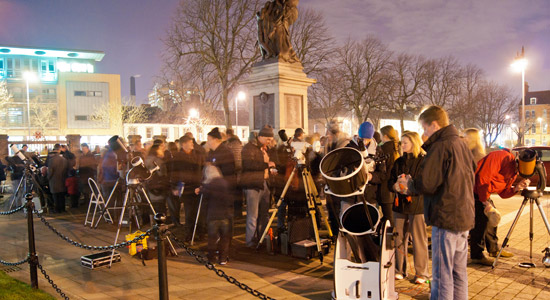 On Tuesday 8 January, the IAA will be working with the astronomers at QUB to deliver another public 'Jupiter Watch', in the grounds just in front of the main Lanyon building of Queen's, starting at 6 p.m.
We will be bringing along as many telescopes as we can muster, as last year we had a lovely clear night, and some 600 members of the public got to see Jupiter and its moons through about 10 telescopes. This year there is merit in getting there early – for the first 30mins or so of the session the Great Red Spot will be visible near the edge of the Jovian disc!
If it's cloudy there will instead be a public lecture by Dr Chris Watson of QUB, in the nearby physics building.