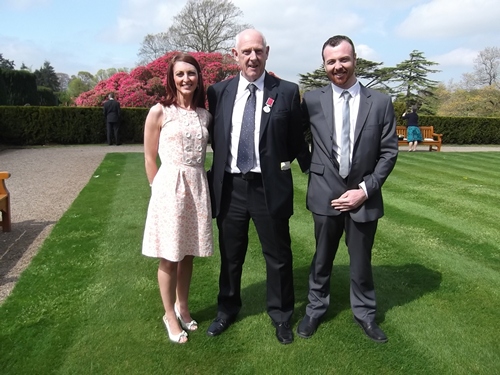 The hot news of last Summer was that Terry Moseley, now commencing his 10th year as IAA President, had been awarded the British Empire Medal for services to Astronomy Education. Well, he has now received his medal and here is Terry's own account of his day…..
"Although the announcement of my award of the British Empire Medal was in June 2013, I was not able to attend that Autumn's Hillsborough Presentation Ceremony as I had already booked to go to the RAS Commemoration for Sir P. M. at the NSC in Leicester. The next one was on April 30 just past, so my guests Angela O'Connell, son Kevin & daughter Katie accompanied me..
The presentations are made by the Queen's Representative for each county, the Lord Lieutenant: for Co Antrim that's Joan Christie, DL, OBE. Incidentally, it was she, representing the Monarch, who officially welcomed President Obama & family when he landed at Aldergrove for the G8 summit last year. So I've shaken hands with someone who has shaken hands with the Obamas! The official photos are not available yet.
After the formal ceremony there were light refreshments, and a chance to explore the lovely gardens. Incidentally, as far as I could tell, the sundial is not aligned properly!
Next is the trip to Buckingham Palace for the Queen's Garden Party on June 3. Only one guest is allowed for that, so Angela will be doing the honours."
So, Congratulations Terry from all of us in the IAA!