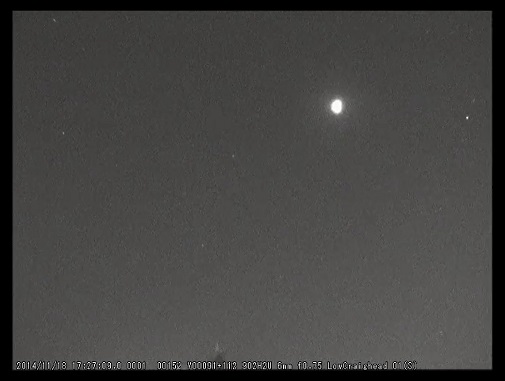 At 17:30 on Tuesday 18th November IAA President Terry Moseley received a call from an IAA member at the Met Office in Aldergrove reporting a fireball "as bright as the Moon". The still frame above was taken from Low Craighead Farm, near Girvan, Ayrshire (please contact us if this is yours!) and shows the fireball, and to the right of it, Altair, a first magnitude star, the 12th brightest in the sky!
Terry was on to the BBC who carried the report on Evening Extra on Radio Ulster, and on the BBC NI News website here….
Eye-witness reports came flooding in with over 40 being received from as far afield as Dublin, North West England and Western Scotland, and some video footage was sent to Armagh Observatory from Girvan, Ayrshire.
The reports are being evaluated and responded to, but this looks very interesting indeed!
Here is the first report from Donald Ferguson at the Met Office, Aldergrove….
Fireball sighting.
Time 17:27 and approx 15 secs. Watch checked against online clock.
Looking NE, from Aldergrove, very bright, fireball observed, head was brilliant white with a touch of pale turquoise in it and there seemed to be a translucent ‘tail’ of dark orange/brown behind, so I had to do a double take to ensure that is wasn’t a firework. Magnitude approx -9 or -10, so brighter than Iridium satellites at their best and about 4 times the size. The head also seemed to be quite elongated and pointed in an ellipse shape.
I saw it heading down towards the horizon at an angle of approx 15-20 deg, from a compass bearing of 070 deg to 030 deg, and lasting for approx 5 seconds. It disappeared steadily, without a flash, just getting smaller and smaller, and the last I saw of it was at a compass bearing of 030 deg, and lower than in the sky than Cappella was at the time.
There was no audible sound with it.
There were 4 witnesses, including myself and we all agree this is a fair assessment of events.
Hope that helps,
Regards
The video from the Meteor Camera in Girvan is here…..