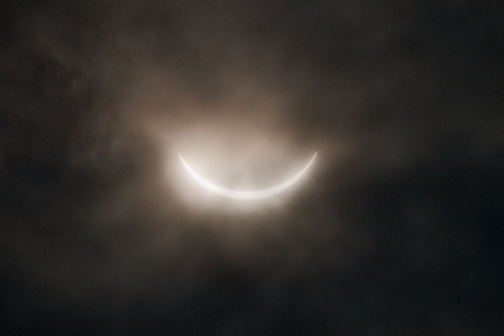 On the morning of 20th March 2015 the North Atlantic Ocean will experience a Solar Eclipse. Along a narrow path through the ocean, making landfall in only two places, The Faroe Islands and Svalbard, the eclipse will be Total. Throughout the UK and Ireland there will be a Deep Partial Eclipse of the Sun peaking at around 09:30. At this time approximately 93.1% of the Sun will be obscured in Belfast, and a little more, 94.4%, will be obscured on the North Coast.

At no time during a partial eclipse is it safe to look at the Sun directly – viewing even 7% or even less of the Sun will cause serious eye damage!

We will be holding a number of events around the Eclipse, timed to tie in with BBC Stargazing Live 2015

Firstly, our regular lecture on Weds 18th March will feature Amateur Astronomer, Photographer and Eclipse Chaser Paul Evans. Being a veteran of three totalities and a 97% partial Paul will explain what is happening, what to see and how to see it safely. This will be held, as usual, in the Bell Theatre, QUB at 19:30 sharp.

Secondly, on the Friday morning, 20th March, we will have teams assembled at four locations to show members of the general public the eclipse. These will be (click for map)  Portballintrae, Larne, Scrabo Tower and Queen's University, Belfast.

Details of the eclipse timings and an animation can be found at Time and Date here….

Thirdly, on the evening of Friday 20th, for those who want more astronomy we will, jointly with the astronomers from QUB Astrophysics Research Centre, have a Jupiter Watch outside Queen's University, Belfast.

More on these events here…….