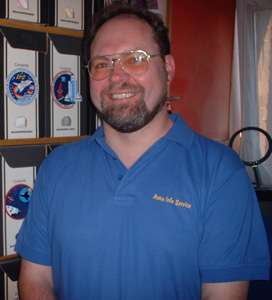 Spaceflight historian David J. Shayler, FBIS (Fellow of the British Interplanetary Society – or as Dave likes to call it – Future Briton In Space!) was born in England in 1955.  His lifelong interest in space exploration began by drawing rockets aged 5 but it was not until the launch of Apollo 8 to the moon in December 1968 that the interest for human space exploration became a passion. His first articles were published by the British Interplanetary Society in the late 1970’s and in 1982 he created Astro Info Service (www.astroinfoservice.co.uk) to focus his research efforts. His first book was published in 1987 and now has over 20 titles to his name including works on the American and Russian space programmes, the topics of space walking, women in space, and the human exploration of Mars.
In 1989 he applied as a cosmonaut candidate for the UK Project Juno programme with the Soviet Union (now Russia). The mission was to spend seven days in space aboard the space station Mir. Dave did not reach the final selection but progressed further than he expected. The mission was flown by Helen Sharman in May 1991. In support of his research Dave has visited NASA in the United States and the Yuri Gagarin Cosmonaut Training Centre in Russia, where visits to space training facilities and handling real space hardware has provided a valuable insight into the activities of a space explorer and the realities of flying and living in space.
He is a friend of many former and current astronauts and cosmonauts, some of whom have accompanied Dave of visits to schools across the country.  For over 20 years Dave has delivered space presentations and workshops to children and social groups across the UK. This programme has developed into a three tier project of presentations, mini and full day workshops to help the younger generation develop an interest in science and technology and the world around them.
Dave lives in the West Midlands and enjoys spending time with his wife Bel, Jenna a rather large white German shepherd (who is also our company mascot) and indulging in his love of cooking.
Doors open about 7.15pm. There is free parking available on the campus in the evenings. Admission Free, including light refreshments. We are located in the Bell Theatre, Department of Mathematics and Physics, QUB – details here……
With thanks to the Astrophysics Research Centre, QUB, for assistance with this event.