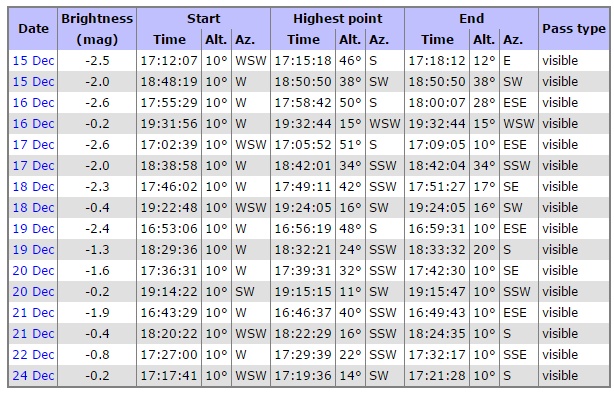 Following on from the successful Soyuz mission delivering Tim Peake to the Interbational Space Station, you'll be able to see Tim passing over Northern Ireland once or twice an evening until Christmas Eve.

The station appears as a bright object, almost as bright as Venus rising in the South-West and moving slowly across the sky – at 17,500mph! It takes about five minutes to cross the sky completely. The graphic above shows the times for Belfast – for those in the West of the province it will be just a few seconds earlier – at 5 miles per second it doesn't make much difference!

Photographers may want to put a camera on a tripod with a wide angle lens and time exposure of 15-30 seconds where the path of the station will show up as a line on the frame.

See the latest updates on the link below.