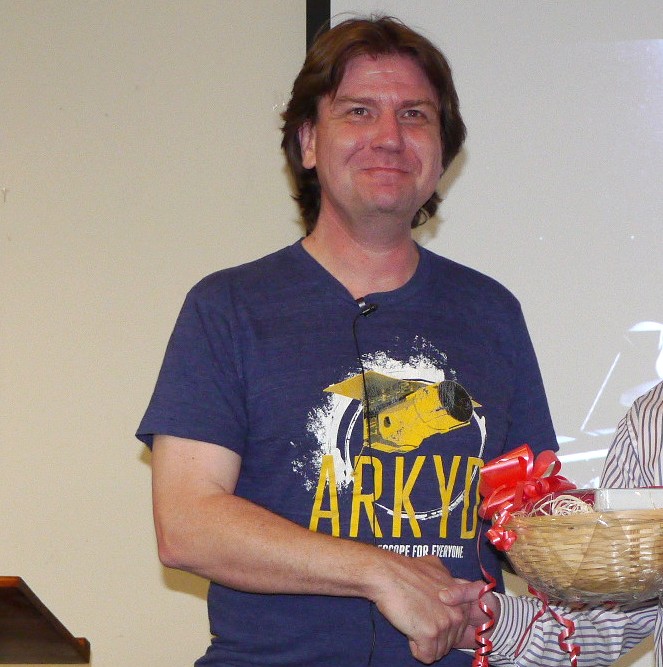 We are delighted to welcome well-known astronomy populariser Nick Howes to talk to us on the ALMA Telescope.
Nick is a freelance science writer and amateur astronomer, whose work has included science writer for the European Space Agencies Science Portal.
A Fellow of the Royal Astronomical Society, he has written for Astronomy U.S, Sky and Telescope, Popular Astronomy and many other publications and websites, including occasional guest articles for NASA's website. His images of comets and asteroids have graced the NASA home pages on multiple occasions.
His comet and general imaging work has won awards and been featured by the like of National Geographic, The Times of London,Universe Today, Space.com, Financial Times and Discovery Channel Science as well as multiple books and peer reviewed journals.
He is the Pro-Am Programme Manager for the twin 2-metre Faulkes Telescopes, where he coordinates projects with the European Space Agency on their near Earth object programs, ESO on massive star cluster observations and NASA's CIOC project monitoring Comet ISON.
Currently Nick is also working as a research associate with the Lowell Observatory in Flagstaff on their LARI program, the 2-metre Liverpool Telescope on cometary observations and the Italian CARA comet research group on dust measurements for cometary bodies.
Nick has over 300 NASA ADS citations for observational work on comets and asteroids, and is in the Guinness Book of records for leading a team of UK Astronomers in creating the World's largest image composite of the Moon taken by ground based observations.
A STEM ambassador in the UK, he has appeared on both BBC television and radio and he regularly features as the official astronomer for the BBC in the South West of England. He is also the tour leader for astronomy holidays in Africa and a consultant to the GEO Observatory in Andalucia, Spain. For more info See http://cherhillobservatory.freewebspace.com/
Lecture Synopsis –
The evolution of the telescope over the last 400+ years has led humankind to a greater and greater understanding of the Universe we inhabit. But as the LIGO experiment recently showed, looking at the Universe in optical wavelengths is only a part of the picture. Nick Howes will discuss one of the greatest scientific projects of the 21st Century and how its development will hopefully answer some of the great questions in science.
Doors open about 7.15pm. There is free parking available on the campus in the evenings. Admission Free, including light refreshments. We are located in the Bell Theatre, Department of Mathematics and Physics, QUB – details here……
With thanks to the Astrophysics Research Centre, QUB, for assistance with this event.