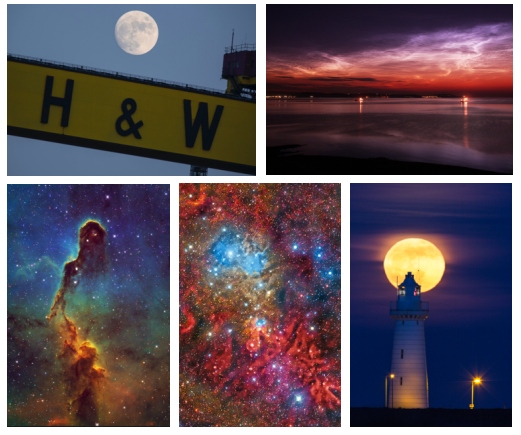 ‘Heavens Above’ is an Astrophotography exhibition presented by The Irish Astronomical Association. All are welcome to the launch on Mon 3rd July 1.30-3.30pm in the Carnegie Library – Hamilton Road, Bangor. The exhibition is open until 29th July.

This is a free family event with Tea & Coffee, an incredible Meteorite display, solar viewing with telescopes, weather permitting, talks by Prof Stephen Smartt from QUB, Dr Mike Simms from the Ulster Museum and Paul Evans from the IAA.

All 40 images on display have been taken by our members.

The exhibition runs until 29th July 2017 and has previously been staged at a number of high profile venues with huge popular acclaim, including the Linenhall Library, Belfast, the Lisburn Island Arts Centre, the Clotworthy House gallery, Antrim and the St Patrick Centre, Downpatrick. The meteorites displayed are an exciting new addition to the exhibition originating from asteroids, the Moon and even Mars before they make a fiery landing on our own planet Earth. These meteorites are both rare and valuable and this is your chance to get up-close with these remnants from the solar system’s other worldly bodies.

This piece concerning the Meteorites on display was written by Dr Mike Simms of the Ulster Museum….

From Heavens Above to Hell on Earth

The meteorite that exploded high above the Russian city of Chelyabinsk in 2013 weighed about 10,000 tons and was just 17 metres across. But travelling at 40,000 mph it exploded with the force of more than 20 Hiroshima bombs! So imagine the effects of a meteorite 3 or 4 kilometres across hitting the ground at this speed. It would literally create a Hell on Earth. It formed a crater perhaps 40km across and 5 km deep. Temperatures reached as much as 10,000oC, the meteorite and thousands of cubic kilometres of the rock it hit would melt or even vapourise. Blobs of molten rock were flung out across the landscape by the impact. They form a distinctive layer, an ‘impact deposit’, that spreads for hundreds, or even thousands, of kilometres in all directions from the crater.
On Earth these impact craters and impact deposits are very rare. Over countless millions of years most are buried or eroded away. In the UK only two impact deposits, and one deeply buried crater, have ever been found. For the first time ever pieces of both of these unique impact deposits, and some pieces of the Chelyabinsk meteorite, are on display together as part of the Heavens Above exhibition which runs from 3rd to 29th July at Bangor Carnegie Library. They are on loan from National Museums Northern Ireland.
In the far north-west of Scotland is an impact deposit up to 12 metres thick, with green chunks of impact-melted rock mixed with red sand. It was deposited almost 1200 million years ago, flung out from a 40 km diameter crater that now lies deeply buried beneath northern Scotland. The other impact deposit, found near Bristol, forms a layer just a few cm thick. It is made of tiny ‘beads’ of impact-melted rock deposited just 214 million years ago. Amazingly, geologists have shown that the source of this deposit is actually in eastern Canada, at the 100 km diameter Manicouagan Crater!
Surrounded by breathtaking pictures of the night sky in the peaceful setting of the library, these unique rock samples were witness to catastrophic events when Heaven and Earth collided in the distant past.