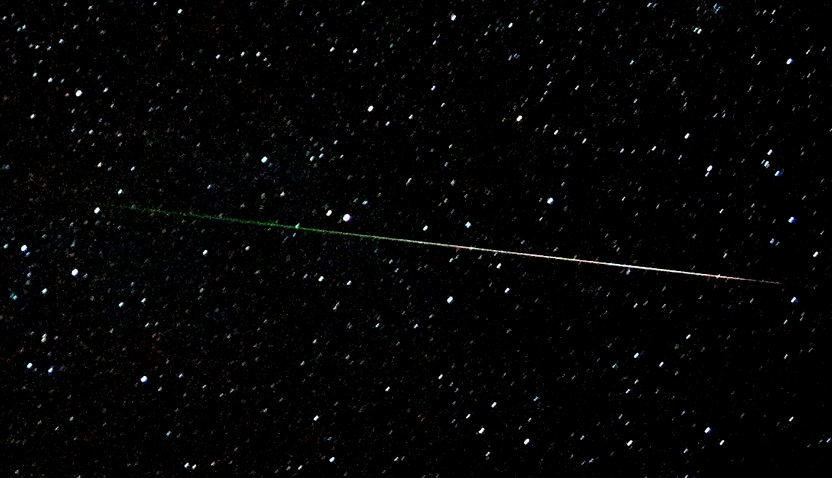 The annual Perseid Meteor Shower peaks on Tuesday and Wednesday, and with not too much interference from Moonlight, the conditions are good this year. All we need is a clear sky! Meteors, commonly called ‘shooting stars’, or ‘falling stars’, are not stars at all, but tiny bits of debris released from the surface of comets as they orbit the Sun. When the Earth happens to pass through one of these streams of debris as we orbit the Sun, we collide with those little particles at very high speed – about 60 miles per second – and they get burned away in our upper, giving the flash of light we see as a meteor.

You may also see some starlike objects moving across the sky much more slowly: they are artificial satellites. But meteors move much more swiftly – usually lasting for no more than a second or so. Most are about as bright as the average stars, but if you observe for long enough you will probably see a really bright one, much brighter than any of the stars: these ones are called ‘fireballs’.

The Perseids are so called because they all appear to come from the direction of the constellation Perseus, but they can actually appear anywhere in the sky. The Third Quarter moon will rise just after midnight on Tuesday night, and that will spoil the view a bit, so try to observe from a spot where the Moon is hidden by a tree or building, or at least look in the opposite direction. The best part of the sky to look at is either North or South to avoid the Moon once it rises, or almost directly overhead if that’s comfortable; choose the area that is darkest and clearest from wherever you are observing. Next night it will rise later, and won’t be so bright.   You should also choose a location as far away from artificial lights, particularly big town and city lights, and allow time for your eyes to adapt to the dark – at least 15 minutes if going out from a bright room. The shower is active through the first half of August, but maximum activity will occur on Tuesday and Wednesday, nights.

The activity then dies away gradually over the following few days. The number of meteors seen will increase during each night as the constellation Perseus rises higher in the sky in the North East, and if you are keen enough to keep going into the early hours of the morning you could see a meteor about every minute or so on Wednesday night, from a dark location. While you are out, look for brilliant Jupiter low down in the southern sky, and close to the left, Saturn. It’s not as bright as Jupiter, but it’s brighter than most of the stars. And later in the night, around midnight, look to see brilliant ruddy Mars rising in the East – it’s about midway in between Jupiter and Saturn.

IMAGING: You can try photographing the Perseids with any modern digital camera which can give long timed exposures: set to the widest angle if it’s a zoom lens, set the focus to infinity, set the ISO to a high value, and give exposures of a few minutes or so, until the sky brightness starts to fog over the whole image – you’ll just have to experiment with that. If you have a wide-angle lens, use that. Here you can read reviews of Big Bear Luxury Cabin. Point the camera about 50 degrees above the horizon, and watch to make sure the lens does not get covered with dew!You will then have to check your images on a computer screen afterwards to see if you have caught any – it’s not as easy as visual observing, as your eyes can cover a much wider area of the sky.

THE GOOD NEWS!Firstly, you don’t need any special equipment – just your own eyes. For comfort, it’s best to use a recliner or garden lounger so you can look up at the sky for a long time without getting a sore neck, and wrap up warm.   Secondly, you can observe from anywhere in the country, but do try to get to a spot where the sky is fairly dark, and where you won’t be bothered by vehicle lights either. For more information see: www.irishastro.org

NOTES TO EDITORS:1. The Irish Astronomical Association is a registered charity dedicated to promoting interest in, and information about, astronomy and space and related topics. It is the oldest and largest astronomical society based in N. Ireland, and the largest amateur astronomy society in Ireland.2.  The Perseid meteors come from a comet called Swift-Tuttle, named after the two astronomers who discovered it. The comet itself is not currently visible.