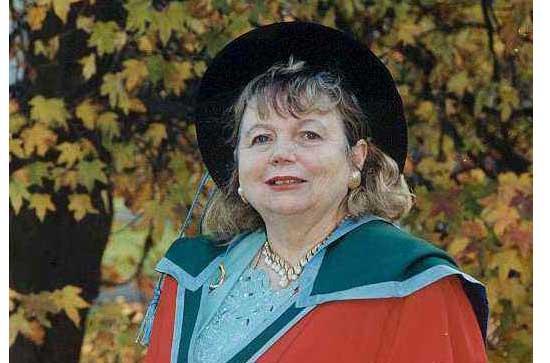 Susan McKenna-Lawlor is is an Emeritus Professor at the Maynooth University Department of Experimental Physics. She was a Member of the Senate of The National University of Ireland and a member of the Governing Authority of Maynooth University. She is also Managing Director of  Space Technology Ireland, Ltd (STIL) which builds instrumentation for space missions.
She has been involved with various experiments flown on ESA, NASA and Russian Space Agency missions. She developed a set of instruments to monitor the Martian solar wind on the Mars Express mission launched by the European Space Agency. The instruments were designed to collect clues to the mystery of water on Mars – where it is or was, where it came from and what happened to it.
Her work earned her one of the most prestigious honours available to space scientists – election to the International Academy of Astronautics.
Professor Susan McKenna-Lawlor received the Honorary Degree of Doctor of Science (DSc) in  2005 for her contribution to astrophysics from the University of Ulster.
The title of her talk is "The Rosetta Mission and its Lander Philae"  The topics covered will include: an account of the ten year Cruise Phase of the Rosetta Mission to Comet 67P/Churyumov-Gerasimenko and what was learned along the way,  the rendezvous of Rosetta with Comet 67P/C-G; the deployment of Philae and its landing on the cometary surface; first results obtained during the surface campaign  and what is happening now.
Doors open about 7.15pm. There is free parking available on the campus in the evenings. Admission Free, including light refreshments. We are located in the Bell Theatre, Department of Mathematics and Physics, QUB – details here……
With thanks to the Astrophysics Research Centre, QUB, for assistance with this event.