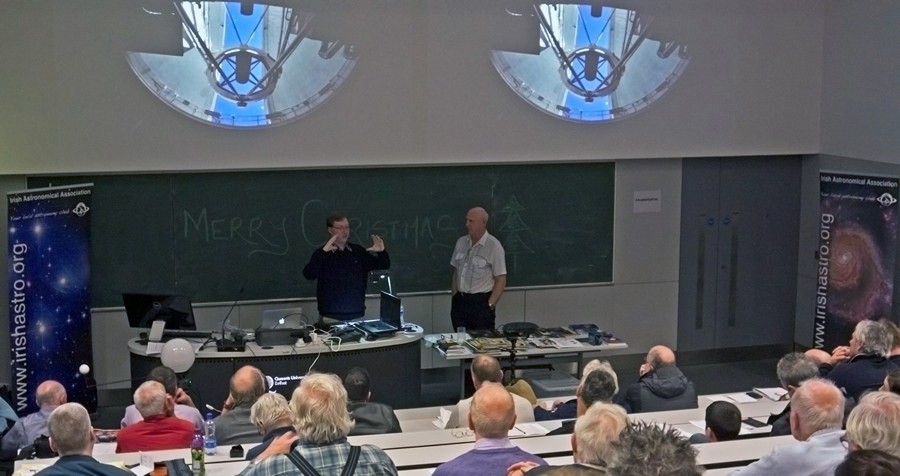 Well after two and a half years of Covid and the associated lockdowns we are finally returning to in-person meetings at Queen’s University, Belfast

This time we will meet in the Larmour Theatre which is in the same building as before but accessed by turning right just after the Whitla Hall.

The Larmour is much larger than the Bell and if our previous audience levels continue then there will be much more space for Social Distancing.

For those who are not yet ready to join us in a live situation our intention is to provide a recording of the lectures within a day or two where we can. These will be on our YouTube Channel where you will find an archive of many past lectures including those we ran on Zoom during the Pandemic.

We are currently finalising the Programme but the first two lectures are as follows:_

5th Oct: Prof Alan Fitzsimmons, QUB: “Moving an Asteroid – Did we do it?” (the results of the DART impact on Didymos)

Synopsis of the first talk:

In 1930, Clyde Tombaugh’s discovery of Pluto seemed to mark the furthermost boundary of our solar system. Here, it was thought, was the mysterious Planet X, the ninth planet responsible for inexplicable irregularities in the orbit of Uranus.

The discovery of Pluto’s small mass briefly gave Planet X new life: but the discovery that Uranus’s orbit was not irregular after all seemed to kill it once more. There were nine planets in the solar system, with Pluto as the last: an idea that held for decades, an idea we were all taught in school.

But now, with Pluto demoted to a dwarf planet, and several other Pluto-like objects discovered in the distant frontiers of the system, the Planet X hypothesis has been unexpectedly resurrected. What lies beyond Pluto? Is there yet another planet out there in the coldest, darkest reaches of our solar system? What is the evidence for this new Planet Nine?  And if it truly exists, might the upcoming Legacy Space and Time Survey at the Vera C. Rubin Observatory discover it?