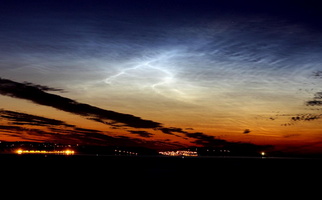 The 2013 Noctilucent Cloud Season has kicked off to an electric start with a magnificently bright display starting almost immediately after sunset on 30th May. The display continued until the sky lightened after 0230 on 31st, though it was somewhat subdued by this time.

There will doubtless be more of these displays visible during the rest of the season which runs until the beginning of August. Look to the North an hour or so after sunset any time until the oncoming dawn lightens the sky.
These clouds form in the Mesosphere near the pole and are visible due to sunlight reflecting off them from the other sid of the pole. Northern Ireland is an ideal location from which to view them – further north the sky is too light to see them, further south and they are too far away actionsolar.net. This display was very early and is indicative of a good season to come!
Pictures in our gallery here…..