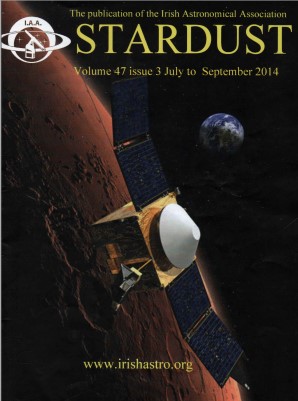 Stardust is the quarterly magazine of the Irish Astronomical Association. As digital copies become available they will be included here for online reading, however the current edition will always be for members only!

The IAA is governed by a Council elected by the members at the Annual General Meeting, traditionally being the last meeting of the season towards the end of April.

The full Council is as follows:-

This photo shows the Council as it stood at November 2013

This photo shows the Council as it stood at March 2012 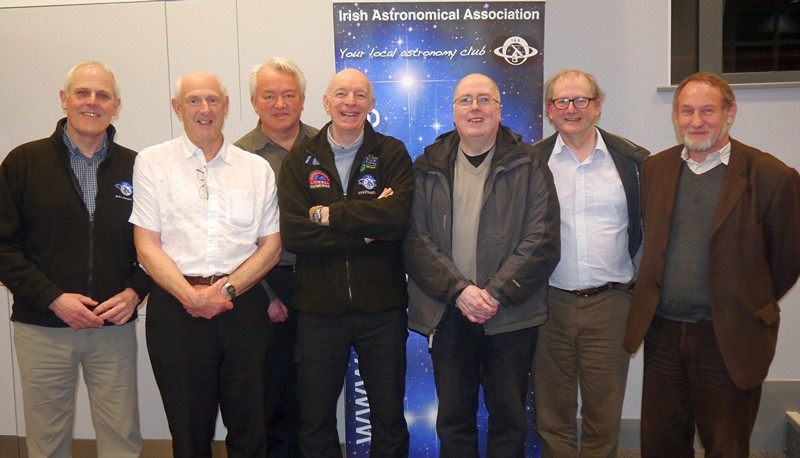 This history covers two distinct periods  of the IAA’s development. In 1946 it was formed as the Belfast Centre of the Irish Astronomical Society. Apart from Dublin there were other centres in Armagh, Cork, Derry, Galway, Clonmel and Dundalk though some of these didn’t last long. The IAS was formed in October 1937 in Dublin, but established the regional centres in the years afterwards. For the first five years the senior officeholder was designated “President”. This changed to “Chairman” in 1951. 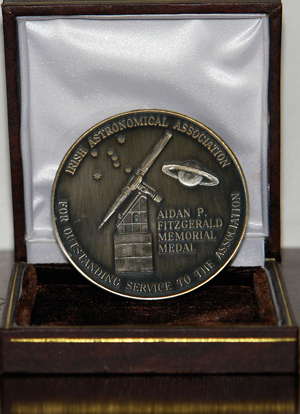 The IAA issues two awards, the Fitzgerald and Opik medals.

“The Aidan P. Fitzgerald Memorial Medal is the prestigious award of the Irish Astronomical Association, and is named in memory of one of its leading members back in the 40’s and 50’s. It is presented not more than once per year for “Outstanding Service to the Association” to someone usually, but not necessarily in a Council post.

Aidan Fitzgerald was born in Limerick, Ireland and had a keen interest in astronomy since childhood. Later he bought telescopes and other equipment and set them up in an observatory in his back garden. He became a leading light in the Belfast Centre of the old Irish Astronomical Society, and later became Chairman. He was also on the editorial board of the Irish Astronomical Journal. By profession, he was a principal officer in the Northern Ireland Ministry of Health and Local Government, and had been awarded the O.B.E. He never married, and died suddenly in January 1965 from a heart attack, just short of his retirement.

In June 1954, the planet Mars was closer to earth than it had been for several years, but the most ideal conditions for observation were from the southern hemisphere. Astronomers from all over the world co-operated to make observations of the planet and a committee was set up under the chairmanship of Professor Earl C. Slipher from the Lowell Observatory in Arizona.

Slipher was probably the greatest authority on Mars and was to observe and photograph the red planet from the Lamont-Hussey Observatory at Bloemfontein, South Africa  using the great 27-inch refractor, (now dismantled)  Fitzgerald was invited to join him at the invitation of the National Geographic Society who sponsored the studies, which were to last some four months.

As to the medal itself, it is tastefully minted in bronze gilt, and on the obverse shows the profile of the famous “South Refractor” at Dunsink Observatory outside Dublin, while the reverse has the recipients name and date engraved inside a laurel wreath.” (Many thanks to John C McConnell for the above words)

The Opik medal is a bit more special and is awarded for “Exceptional Service to Astronomy”.
Ernst Opik (1893-1985) was a noted Estonian astronomer and astrophysicist who spent the second half of hiscareer (1948–1981) at Armagh Observatory. He was born in Kunda, Estonia and studied at the Universities of Moscow and Tartu.
His astronomical work was varied and groundbreaking. In 1916 he devised a method of measuring the density ofbinary stars. His sample was Omega 2 Eridani, a white dwarf, which he estimated at 25,000 times the density of theSun which he dismissed as impossible. In fact this was an underestimate!

Later work included the 1922 determination of the distance of the Andromeda Galaxy – with a fair degree of accuracy, and the 1932 postulation of the existence of the Oort cloud, also called the Opik-Oort cloud.

His grandson Lembit Opik is the former Lib-Dem MP.
The medal has only been awarded twice as follows:-